On Sunday January 26, 2014 we had the 56th annual Grammy Awards Show.  The Grammys, like always, were spectacular!  There were wonderful over the top music performances, well-dressed celebrities, and some……well let’s just say there was one in  particular who should not have gone at all!

LADIES AND GENTLEMAN………I AM TRULY SHOCKED AND SPEECHLESS!  THIS MAN WENT TO THE GRAMMYS, AN AWARD SHOW WHERE MUSICIANS/ARTISTS RECEIVE THE MOST PRESTIGIOUS HONOR THAT YOU CAN EARN IN MUSIC, DRESSED LIKE THIS!!!!  JUST LOOK AT THIS DAMN OUTFIT!! 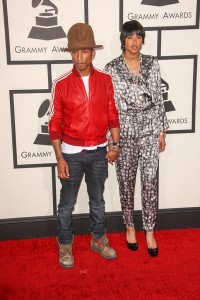 You see Pharrell here pictured with his wife Helen.  First of all, let me direct your attention to his boots.   PHARRELL DIDN’T EVEN FINISH LACING UP HIS BOOTS!  AND I’M WILLING TO BET HE WASN’T WEARING ANY SOCKS IN THOSE DIRTY FADED BOOTS!

Now on to his jeans…PHARRELL KNOW DAMN WELL HE DIDN’T IRON THOSE JEANS.  HELL, HE’S PROBABLY BEEN WEARING THEM ALL WEEK LONG!!!!

Let’s look at him from the waist up.  He has on a plain white t-shirt.  But that red jacket…….PHARRELL YOU KNOW YOU ARE WEARING HELEN’S JACKET!!!!  DO YOU SEE WHERE HIS WAISTLINE IS?  HIS PANTS ARE NOT SAGGING.  EITHER YOU WORE YOUR WIFE’S JACKET TO THE GRAMMYS OR YOU JUST GOT A JACKET THAT WAS TOO SMALL!  AND WHAT’S WITH THE HAT????  YO PHARRELL…..ARBY’S WANTS THEIR HAT BACK (AND THEY DID ACTUALLY PAY HIM TO GET THAT HAT, GOOGLE IT)!!!!  IF YOUR INTENTION WAS TO GET IN THE SPOTLIGHT BY WEARING THIS TACKY OUTFIT TO THE GRAMMYS, YOU CERTAINLY ACCOMPLISHED YOUR GOAL!

At some point during The Grammys he changed his outfit.  I guess he was probably overhearing people talk about his “Grammy Look”. 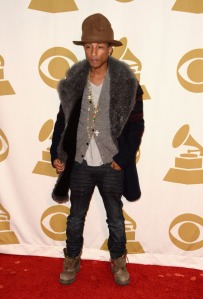 Because I am fabulous?  Pharrell you need to STOP it!  Now look at this picture; there were only three things he did different with this outfit.  He put on a thin sweater, three necklaces, and a coat with a fur collar!  BUT HE’S STILL WEARING THEM DIRTY FADED BOOTS, THOSE WRINKLED JEANS, AND THAT HAT!!!!  HEY PHARRELL…..SMOKEY THE BEAR IS LOOKING FOR HIS HAT!!!!

After seeing the way he was dressed at The Grammys, I’m sure everyone is asking this question…..Is it ever okay to attend a formal event dressed in casual wear?  In my opinion, ABSOLUTELY NOT!!!!  Like I said before…IT’S THE GRAMMYS, AN EVENT THAT ONLY COMES ONE TIME A YEAR!  When you receive a nomination for such a high honor and get invited to such a formal event, you are supposed to be DRESSED from head to toe!

He had another formal event in March.  PHARRELL was nominated for an Oscar for Best Song in a motion picture “HAPPY”.  I said if he arrived there dressed the same as he was for The Grammys, they won’t even let him in through the front door….…

Pharrell attended the 86th annual Academy Awards on Sunday March 2, 2014.  Now I was thinking to myself, Pharrell learned his lesson from the 2014 Grammy Awards.  I was very excited and anxiously awaited his red carpet arrival. Pharrell finally came out with his wife Helen to gracefully walk the red carpet looking like this………..

Now some of you are looking at this picture saying “What’s wrong with the outfit?”  The question of the day should be “WHAT’S RIGHT WITH IT?  Listen y’all, from the waist up Pharrell looked wonderful….that’s right from the WAIST UP!  Direct your attention to his legs…….YO PHARRELL….NOBODY WANTS TO SEE YOUR “BATTLE WOUNDS”!  There are a lot of people that have skin imperfections, so with that being said, PHARRELL….AIRBRUSH YOUR LEGS!  To me, he should have worn pants instead of shorts.  Why wear shorts if you’re not going to have any socks on?!

Pharrell got the chance to perform his Oscar nominated song “HAPPY”   The performance was great but the outfit he wore fell short once again!    I CAN NOT BELIEVE HE WORE THIS FOR HIS PERFORMANCE!!!!!

I know y’all……HIS OUTIFT IS SIMILAR TO WHAT HE WORE TO THE GRAMMYS!  What is the deal with that damn HAT!!  Pharrell obviously changed the color of his hat and jacket but added something new to this ridiculous outfit.  He decided to upgrade from boots to RED GLITTER SNEAKERS.   REALLY PHARRELL?!  Why are you wearing your wife’s clothes?!  I was trying to focus on your performance but at times I was blinded by the shoes!

Ultimately Pharrell did not take home an Oscar for best song.  Maybe there should be a special award given to him for these terrible outfits.  Pharrell, you are definitely an ATTENTION SEEKER!!!  However the outfits have got to go!!!!!  I will be keeping PHARRELL under close surveillance.