Producer & DJ based out of St.Louis, MO, also co founder of Delmar Records.

Welcome to our new weekly segment dedicated to the DJ. Our first feature mix is by Spontaneous Mixx from St. Louis, MO. Learn more about him below and listen this great mix below.

Born and raised in St. Louis, Spontaneous Mixx has always been a music enthusiast. Even as an adolescent, when most his age were just listening to music, Spontaneous was keen on observing production styles and musical influences. He became interested in the art of mixing songs while still in high school and started learning to spin in 2000 when a close friend bought a set of turntables. In the early 2000s, Spontaneous began subcontracting work for a local DJ company, and taking random gigs with other DJ friends until the mid 2000s when he started to venture out on his own.

At the beginning of his mix-show career, Spontaneous was a hip-hop DJ, but has since evolved to appeal to a larger audience.  He now spins the hottest top40 hits, mixed with electronic and pop music.  He is, as his namesake suggests, a very spontaneous DJ, in that he does not perform pre-practiced, pre-arranged mix sets, and no one night sounds like the other.

(CNN) — Joe Cocker, the British blues-rock singer whose raspy voice brought plaintive soul to such hits as “You Are So Beautiful” and the duet “Up Where We Belong,” died Monday after a battle with lung cancer. He was 70.

Cocker’s performing career spanned some 50 years, from Woodstock, where he sang the Beatles’ “With a Little Help From My Friends,” to the digital-music era. He had tour dates scheduled well into 2015.

“Goodbye and God bless to Joe Cocker from one of his friends peace and love,” tweeted Beatles drummer Ringo Starr.

Cocker began as a singer in England at the same time as the Beatles, with whom he was often linked. He played pubs across the country in a series of rock bands before he and his Grease Band recorded “With a Little Help From My Friends” in 1968 with Jimmy Page, Steve Winwood and others.

The song became a No. 1 hit in England and propelled him to Woodstock, where his passionate live version was a festival highlight and launched his U.S. career.

Cocker scored another major success in the early 1970s with “Mad Dogs and Englishmen,” a live album and concert film.

“Up Where We Belong,” his duet with Jennifer Warnes from the movie “An Officer and a Gentleman,” was Cocker’s biggest U.S. hit, topping the Billboard singles charts in 1982. It also won him a Grammy, and the Oscar for best original song.

Cocker was known for his spasmodic movements on stage, where he often flailed his arms as he sang. His distinctive moves, he said, were almost accidental.

“I never played organ or piano or guitar, so it was more out of frustration and me just trying to impersonate in a way,” Cocker told the Broward-Palm Beach New Times in 2012. “I did it subconsciously. People mistook for me being ill, like I had palsy. I’m not nearly so demonstrative now, but I still have my own way of feeling the rhythm.”

Cocker also had lesser hits with covers of torch classic “Cry Me a River,” Traffic’s “Feeling Alright,” the Boxtops’ “The Letter” and the Beatles’ “She Came in Through the Bathroom Window.”

The singer told the Daily Mail in 2013 that by the 1970s his descent into drugs and alcohol had become so severe that he sometimes forgot the lyrics to songs.

“If I’d been stronger mentally, I could have turned away from temptation,” Cocker said. “But there was no rehab back in those days. Drugs were readily available, and I dived in head first. And once you get into that downward spiral, it’s hard to pull out of it. It took me years to get straight.”

He credited his wife, Pam, with helping him get sober.

“It was Pam who helped me get myself back together,” he said. “She made me think positively. I was very down on myself. She made me realize people still wanted to hear me sing, and convinced me I could escape the downward spiral.”

In 2012 he released the album, “Hard Knocks.” That year he talked to NPR about the project and his love of his life in Colorado — despite the harsh winters.

“I embrace the winter these days,” he said in the interview. “The best thing to do is get a big house. If you are going to have cabin fever, have a big cabin. I walk on a regular basis, I have a couple of dogs. The house tucks right into the mountains. I literally feel I have become a mountain man over these past couple of years.”

Musicians of all ages and genres took to Twitter to pay tribute.

“So sad to hear about Joe Cocker. What an entertainer. One of a kind voice. Rock won’t ever sound the same,” tweeted “Glee’s” Kevin McHale.

NEW YORK (AP) — An up-and-coming rapper pleaded not guilty on Thursday to charges he moonlighted as a gun-toting member of a New York City street gang responsible for several shootings during turf wars over drug trafficking.

Ackquille Pollard, who performs under the name Bobby Shmurda, was ordered held on $2 million bail at a hearing in state Supreme Court in Manhattan. His attorney, Howard Greenberg, failed to convince a judge that his client should be released without bail because he was framed and had no reason to run.

“He is a legitimate entertainer,” Greenberg said. “He is rich. He is busy. He is always on tour.”

The Brooklyn-born Pollard is best known for the hit song “Hot Boy.” He also put out a music video that popularized a dance craze called the “Shmoney dance,” and reportedly signed a lucrative record deal with Epic Records.

Greenberg claimed Epic had agreed to help Pollard make bail. A spokesman for the label declined to comment.

Police arrested Pollard on conspiracy, reckless endangerment and gun possession on Wednesday after he left a recording studio near Radio City Music Hall. Police found two handguns and a small amount of crack cocaine in a car in which he was riding, authorities said. 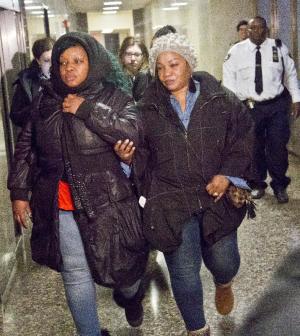 Leslie Pollard, left, is escorted from court after a hearing for her son Ackquille Pollard, also kno …

An indictment naming Pollard charges more than 15 defendants with a variety of crimes including murder, attempted murder, assault and drug dealing. The gang’s gun play left one rival dead, injured an innocent bystander sitting on folding chair outside a Brooklyn home and caused pandemonium outside a nightclub in Miami Beach, Florida, authorities said.

Police seized 21 guns during the investigation, 10 of them while making arrests on Wednesday.

The case carries some “deeply disturbing themes: The gang members’ enthrallment with guns, and a cavalier disregard for human life,” Special Narcotics Prosecutor Bridget Brennan said at a news conference.

The hip-hop artist’s songs and videos were “almost like a real-life document of what they were doing on the street,” added James Essig, head of a New York Police Department unit that made the arrests.

The court papers allege that Pollard fired a gun toward a crowd of people outside a barbershop in Brooklyn earlier this year. They also say he was present last year during a confrontation between rival drug gangs outside a Brooklyn courthouse where shots were fired. 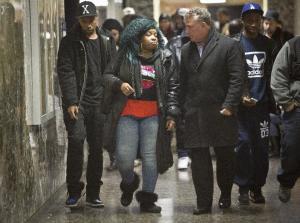 The evidence includes several recorded phone conversations, including some between Pollard and gang members serving time on Rikers Island, the indictment says. The gang used code words, referring to firearms as “tone,” ”socks” or “CDs,” narcotics as “crills,” and shootings as “sun tans,” it says.

During a conversation on April 28, Pollard bragged, “I am two socks Bobby right now,” the indictment says. Another defendant commented, “Bobby out here with two CDs on him like in the wild wild west or something.”

A “Hot Boy” video posted on YouTube in August has been viewed tens of millions of times, and Pollard performed the song for a national television audience this month on “Jimmy Kimmel Live.”

“My music is straight facts,” Pollard recently told New York Magazine. “There are a lot of gangsters in my ‘hood.”

Pollard’s criminal history included two arrests for gun and drug possession, authorities said. If convicted of conspiracy, he faces a maximum sentence of 8 to 25 years in prison.

Rapper Bobby Shmurda was arrested Tuesday night in New York outside Quad Recording Studios which is the same studio Tupac was robbed and shot at back in 1994.  This is the outcome of a long term investigation by police into murder, gun and drug trafficking.

Thirteen people were arrested The rapper is due back in court on January 29th for arraignment. A two million dollar insurance bail has been set. Charges include: conspiracy of second degree murder, assault, weapons and narcotics charges.

Shmurda was born in Florida to a Jamaican Father and Trinidadian Mother. He relocated to Brooklyn New York. This is not Bobby’s first run in with the law. he has spent 14 months in Juvenile Detention and has most recently been charged with criminal possession of a weapon back in June.  Bobby became a hit in his rough neighborhood of East Flatbush, NY with his hit single ‘Hot Boy’ along with many other underground songs He has with his GS9 rap crew. Bobby Shmurda grew popularity in New York for his hot beats, abrasive lyrics, and most notably the truth behind many of his rap lyrics. Street credibility has not been an issue with this rapper as this young artist has rapped about the life he has lived, however this may also be his downfall.

Frigo RevolutionWear is an underwear brand that 50 Cent has been supporting for a while now; 50 hosted their launch party earlier this year.  Fellow New York celebrities Derek Jeter and Carmelo Anthony reportedly have stakes in Frigo as part owners. The brand announced a partnership with 50, Derek Jeter, Carmelo Anthony, and Timbaland on its Facebook page a few days ago. Frigo has not confirmed the monetary amount of the deal with 50, or what the deal exactly entails as of yet.

Frigo, which sells underwear for $100 a pair, seeks to “revolutionize the underwear industry by offering men optimal comfort, moisture control and support, with style and practicality in mind,” according to its website.

J.Cole Bringing Hip Hop Back On the Sales Charts

Hip Hop has been on the decline in recent  years as far as album sales. Society is starting focus their purchasing dollars on digital singles. With this trend whole album sales have been on the decline in the hip hop genre.  However, J.Cole seems to be poised to do numbers that have really only been seen by Kendrick Lamar. In just his first week of sales, He has already hit 250 Sales. Cole’s new album ,2014 Forest Hills Drive’ was released on December 9th, and  If this trend continues, Cole may possible make Gold in his first week once all sales are reported. Could we be on the verge of a rare platinum selling Hip Hop album?