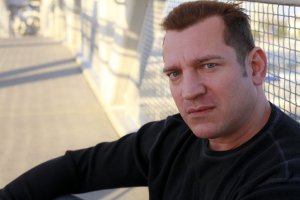 Professional bad guy Dimitri Diatchenko faces felony counts of animal cruelty and making threats after he allegedly ate his ex-girlfriend’s bunny and sent her threatening step-by-step photos of the sick meal. The North Hollywood-based actor’s filmography spans nearly two decades, and includes a small part on ‘Two Broke Girls’ and a fight scene with Chuck Norris on ‘Walker, Texas Ranger,’ which he lost.

His feud with his ex turned into a fatal attraction.

A TV actor who once shared a fight scene with Chuck Norris and played a Russian gangster on “Sons of Anarchy” skinned, cooked and ate his ex-girlfriend’s pet bunny — and then threatened to do the same to her, police said.

The North Hollywood-based actor played small roles on a slew of TV shows. In a 1999 episode of “Walker, Texas Ranger,” he sucker punched Chuck Norris, although Norris ultimately won the fight. Most recently, he appeared in an episode of “2 Broke Girls.”

Diatchenko, 46, still lived with his ex, although they broke up months ago. She recently told him they should no longer room together.

On Sunday, while she was out of the house, he killed her rabbit and documented it on camera, police said.

Diatchenko skinned the pet, cooked it and ate half of it while sending her step-by-step pictures of what he did,” according to a statement from the district attorney’s office.

When the horrified woman came home, he allegedly threatened her, too.

“When she returned the defendant allegedly told her he would do the same to her,” the statement said.

Diatchenko frequently posted photos of a rabbit named Miss Ella on his Facebook page, although it’s unclear if she was the animal he allegedly killed and ate.

Diatchenko is out of a Los Angeles jail on bail. He faces four years and eight months in prison if convicted.

The San Francisco-born actor studied music at Stetson University in Florida and acting at Florida State University. His filmographyspans nearly two decades, and includes small parts in “How I Met Your Mother,” “Family Guy,” “The Wild Thornberrys” and “The Suite Life of Zack and Cody.”

He also appeared in the movie “Indiana Jones and the Kingdom of the Crystal Skull” and provided voice for video games, such as Call of Duty.